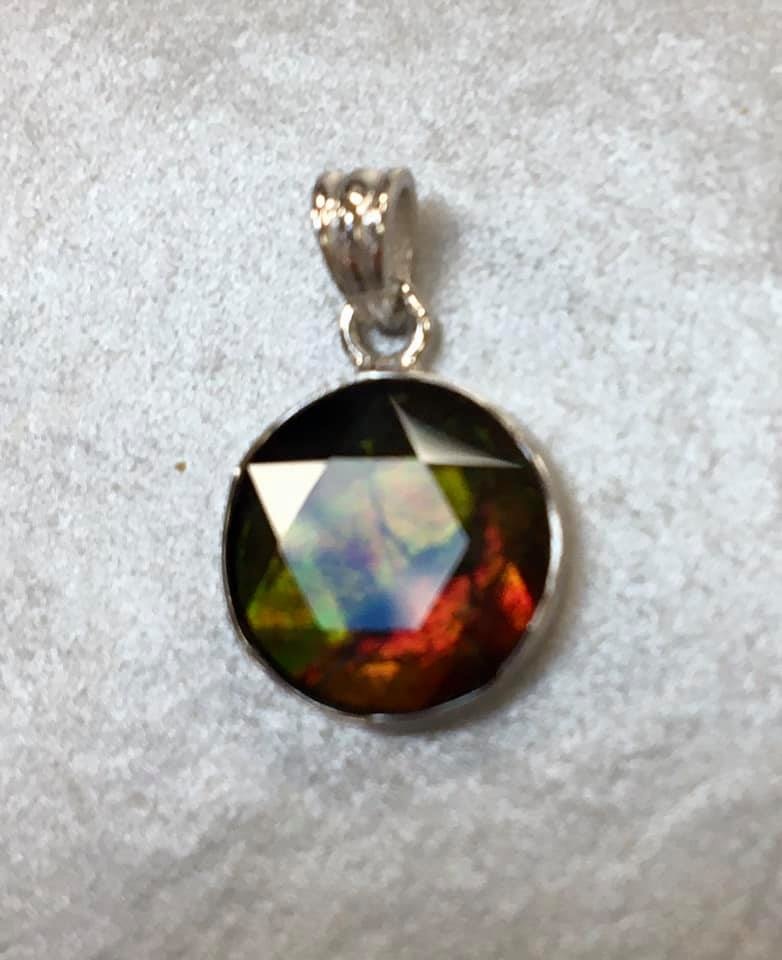 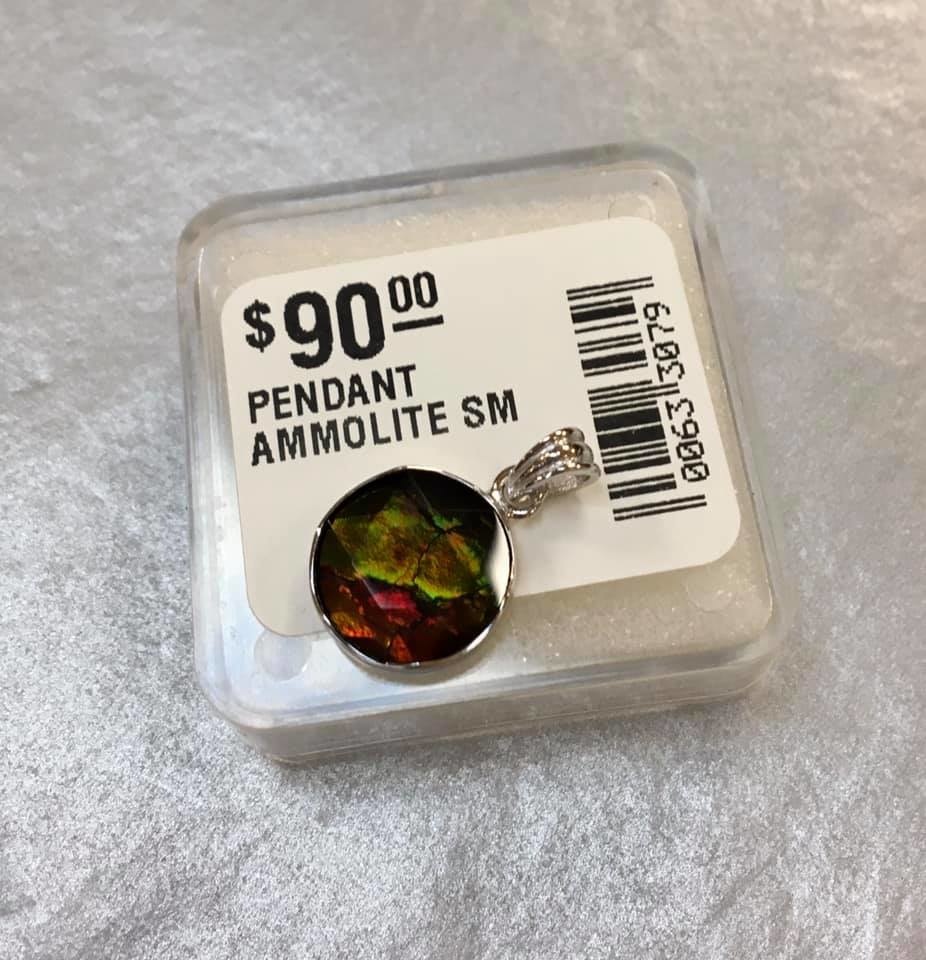 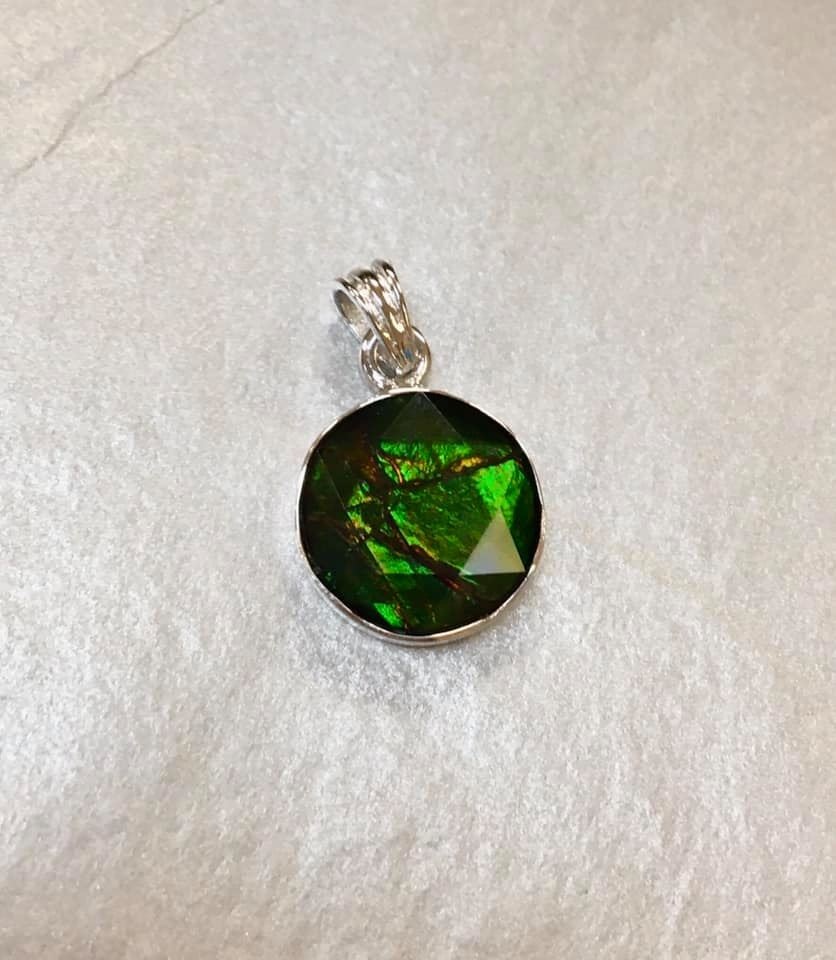 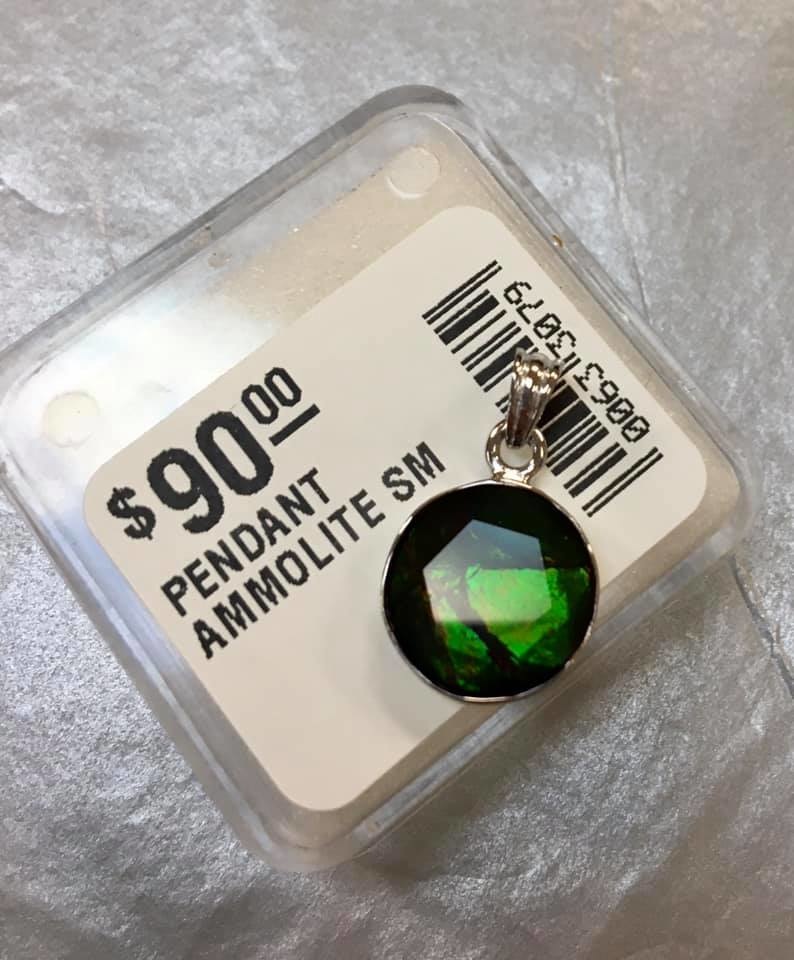 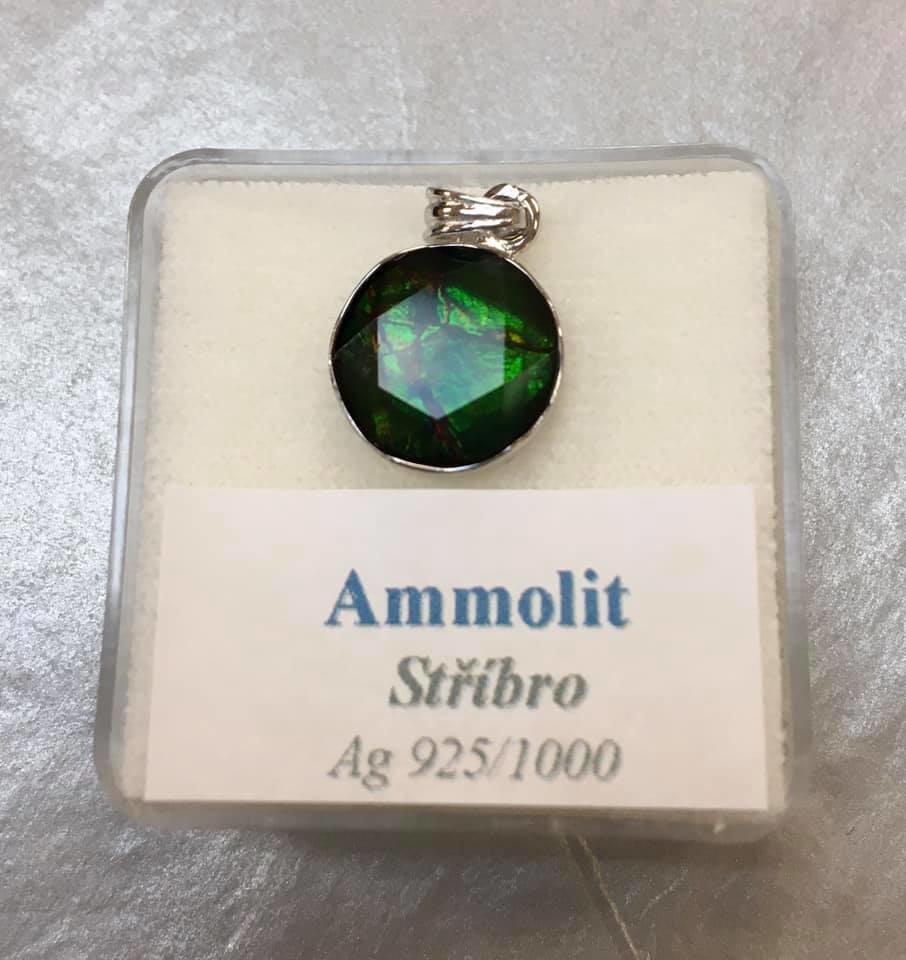 This beautiful small pendant is set in sterling silver and made of ammolite. Ammolite is an opal-like organic gemstone made of the fossilized shells of ammonites, a group of extinct marine mollusc animals.

This beautiful small pendant is set in sterling silver and made of ammolite. Ammolite is an opal-like organic gemstone made of the fossilized shells of ammonites, a group of extinct marine mollusc animals.
It is found primarily along the eastern slopes of the Rocky Mountains of North America. Significant deposits of gem-quality ammolite are only found in the Bearpaw Formation that extends from Alberta to Saskatchewan in Canada and south to Montana in the USA. However, small deposits have been found as far south as Central Utah which also contains gem-quality ammolite.
Ammolite can come in any color in the rainbow but most are green and red. Blue and violet are rare and, typically, more valuable. As ammolite is rare, no two are alike.
Metaphysical Properties:

Ammolite was prized by the ancient Egyptian and Roman societies and likely many other cultures; as it was seen as a symbol of almost any deity that may have had any connection to curved horns.  For this very reason they were considered sacred in Ethiopia. Natives of the region adorned themselves with Ammolite as it was said to grant deep meditative states as well as assist in drawing prophetic dreams.

It is said that these stones radiate positive Earth Energy, bringing luck as well as prosperity in all things.  A very spiritual stone, even a small portion of Ammolite may be used to assist one in finding the proper way down the coiled, spiral spiritual pathway to the center.

A protective element, adding structure, stability and steadiness to one’s life as well as supplementing one survival instincts. Associated with water, Ammolite is known to deeply affect one emotionally.  Mirroring feelings that one may have forgotten existed, whether they be healthy or unhealthy.

Encouraging feelings of self worth Ammolite will enhance ones practicality and reliability; it has been said to increase the positive energies of magic spells and spiritual prayers.

Ammolite is known to strengthen one’s will to live as well as appreciating life and living it to the fullest; being very beneficial to the human psyche.  Feng Shui practitioners believe that Ammolite also has a positive effect on the flow of energy called ‘chi’, assisting one to cleanse and detoxify the body.

Believed to have absorbed cosmic energy from the universe, Ammolite is said to have beneficial effects on anyone near it.  It is known as the Seven Color Prosperity Stone, as it is said to hold all seven colors of the rainbow (red, orange, yellow, green, blue, indigo and violet/purple) and is said to bring the bearer growth, wisdom and wealth.